Posted on December 2, 2014 by Brothers and Sisters of Love

For my thirty years in Chicago two points by theologians have haunted me. First, “The Kingdom of God breaks into our lives when we work, love, and learn from the Poor.” (J. Sobrino paraphrased}.  Second, during the time of Jesus, Israel was confronted by a clash of cultures: Hellenism which valued an educated elite who manipulated the political, economic, and religious systems for their own benefit vs. Judaism which valued care for the poor (W. Brueggemann paraphrased).  For years I tested to see if these things were true and I have used them to guide me in my mission with Brothers and Sisters of Love (BS/L).  I have come to believe that if we are seeking the “Kingdom of God,” caring for the poor is a priority.

Lots of people have accompanied BS/L on the streets, almost all of them have been moved by the obstacles faced by the poor and the positive feeling of being with BS/L.  Recently an older gang member said, “Come on Br. Jim, you was scared the first time you came to Cabrini Green.”  I replied, “No I was with Br. Bill and everybody loved Br. Bill. I felt welcomed.”  He answered, “That’s right there is only one Br. Bill.”

Even with “God’s Kingdom breaking in,” working with the poor is not easy.  I enter homes of people facing death, illness, eviction, lack of food, imprisonment, and violence.  The streets are rough, Chicago suffers over 500 murders a year.

This month I visited three friends in jail, all charged with murder.  They all claimed to be innocent, but three people, from three different parts of the city, are dead.  In an interview about one of the murders and I was asked if I was surprised by what happened.  I replied, “I was not surprised. I could feel the underlying tensions.”

Poverty, even American poverty, is destructive.  The non-working poor do not take care of their business,  Too many do not regularly- see a doctor, go to school, vote, speak the truth, or take responsibility for their homes or neighborhoods.  Most of the people I work with are unchurched.  Young people do not even know the Lord’s prayer.  Still when I read the Gospels, I know why so many of the stories of Jesus are with prostitutes, tax collectors, lepers, the hungry, and the sick, in other words the poor and sinners. Because it is with them that grace and miracles occurs, in other words the “Kingdom of God” reveals itself.

Last month I visited the sister of an ex-gang member.  She is in hospice with incurable cancer.  She was raised in a church, but lived her adult life as a drug addict.  She was distraught.  She had wanted to turn her life around when she got sick, but failed by continuing to abuse drugs.  She was ashamed and felt she deserved her punishment.  I asked if she could forgive herself.  She wept, “No, I do not know how.”  Eventually, I prayed with her.  On finishing the prayer, she jumped to her feet, began praying in tongues, danced through the apartment, and threw herself to the floor- weeping and thanking Jesus.  I thought, “She is beginning to forgive herself.”  On seeing her since, she’s still preparing for death, but seems to be at peace.

Grace, sin, death, violence, despair, hope, love are all part of the mission of Brothers and Sisters of Love. As I prepare for the Holiday Season, I consider myself blessed to live this mission and feel God’s Kingdom breaking into lives.  Merry Christmas. 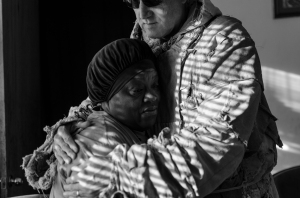 The Mission of Brothers and Sisters of Love is to be a visible sign of Jesus’ Love, Peace, and Presence to the poor in gang-infested neighborhoods in Chicago and to be a bridge between gangs & the poor with the Church. This is done by: 1. Loving everyone 2. Trusting in God 3. Forgiving everyone everything 4. Never being afraid.
View all posts by Brothers and Sisters of Love →
This entry was posted in Uncategorized. Bookmark the permalink.